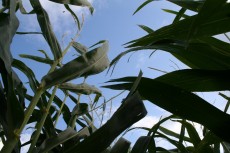 Dendermonde (Belgium) ‒ A hot, dry year such as the current one in which the plants are stressed may generate much higher levels of aflatoxin than under more moderate conditions.  Climatological conditions across Europe and North America might affect the mycotoxin challenge for next year, concludes Nutriad.

Weather is the most important factor in determining whether aflatoxin contamination will be a problem. Hot and dry weather is associated with increased aflatoxin production by the fungus from Aspergillus species. Extremely high temperatures and changing weather conditions (high humidity and drought, high precipitation, big difference between day and night temperatures) are ideal for aflatoxin formation.

Mycotoxins and predominantly aflatoxins are a constant concern for agriculture. Some seasons and weather conditions such as this year’s puts industry on high alert. Aflatoxins are potent mycotoxins that reduce development, impair the immune system, and can cause cancer and death. Several Aspergillus species produce aflatoxins during crop infection, which is greatly influenced by weather conditions including freezes, droughts, rainfall, and shifts in temperature. Weather also influences the average aflatoxin-producing potential of the fungi. Contamination occurs both during crop development and after crop maturation. Interactions of aflatoxin-producers with agronomic practices and weather events at specific crop stages determine the magnitude of contamination through effects on pests, crops, and timing of activities. Weather events that favor high contamination during crop development may suppress contamination after crop maturation either prior to harvest or during post-harvest handling and storage.

Recent episodes of severe contamination of maize and cottonseed highlights the importance of weather influences and the need to adjust cropping cycles and management practices in order to avoid losses associated with aflatoxins. “Although extensive efforts and preventive actions are taken during growing, harvesting and storage periods, the chances of mycotoxin contamination are high. Therefore successful detoxification procedures after harvest are important. The addition of specific feed additives to animal feeds is a very common method to prevent mycotoxicosis.”