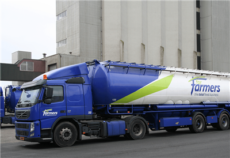 Feed company ForFarmers realised a growth in the total feed sales over the first half year of 2019. The volume total feed reached 5.1 million ton over this period. Despite the increase in feed volume the results over the first six months were disappointing, said CEO Yoram Knoop at the press conference.

“The results over the first six months have been severely influenced by our unsatisfactory raw material position at the end of last year. This has had a negative impact on the sales margins of the feed and therefore effected the financial position of the company”, according to Knoop. The unfortunate position in raw materials has been accounted for by the company itself as ForFarmers didn’t want the farmers to pay for this decision. “We’ve dealt with it and taking our loss, so now we can move forward and look at the new situation for the rest of the year”, confirms CFO Arnout Traas.

To minimize a similar case in future the feed company has taken some precautionary measures in the purchase procedures for raw materials.

The growth in total feed volume is completely due to the recent acquisitions. This resulted in an increase of production of 6.8 percent. Looking at autonomic numbers however the total feed production reduced with 1.6 percent mainly due to loss of market in The Netherlands, Belgium and the United Kingdom. Most of the production loss can be accounted for by the reduction of animal numbers in these countries.

Over the total of 2019 ForFarmers expects the result will lack behind compared to last year. However, looking forward the feed company is positive. Recent acquisitions made sure the division between the main animal groups ruminants, pigs and poultry is more even. “This gives the company a more stable base for the future”, says Traas.

ForFarmers has a cost reduction scheme in place with should reduce total costs with 10 million euro. Part of this scheme is the concentration of the feed production in the UK and the Netherlands. “We’re on track with the program”, according to Knoop. “Our main focus now it to make sure we bend the results back in a positive upward trend that is in line with what our customers expect from our company.”

The CEO is convinced this will be possible in the near future. He is optimistic about the opportunities the market offers in each of the countries ForFarmers is active. Even in the UK. “The Brexit will of course have an impact, but the country is not self sufficient in for example the need for pig meat. The market will correct for that in order to reduce the imports. This will lead to investments in the pig sector.” Also, the demand for poultry meat in Europe is still rising. With the recent investment in de Polish poultry market ForFarmers is in a good position to be a part of that development, according to Knoop.

Other news on ForFarmers: ForFarmers intends to close its site in Crewe